Some days, I just can't get it together. Today was one of those days! Craig and I both somehow slept through our alarms and woke up at 8 A.M.! I'm supposed to be at work by 9ish, and my husband by 8:30 or so. Neither of our work places are strict about it, but we both try not to push any limits.

To be fair, we've had a very sick toddler on our hands the past week and we're catching on sleep, but it escapes me how BOTH of us could pull that off! I hopped out of bed like I it was on fire, threw on clothes and quick make-up, got Eli up and dressed (thank God for nighttime baths and showers), grabbed a to-go breakfast for each of us, and was in the car by 8:20! How's that for fast?

"AMAZING!!!! Added some tomatoes and white onions to the tacos, otherwise followed the recipe. Served them with fresh corn on the cob. Turned out great!!! The entire family loved them 🙂 I will definitely make these again :)" - Pinterest comment 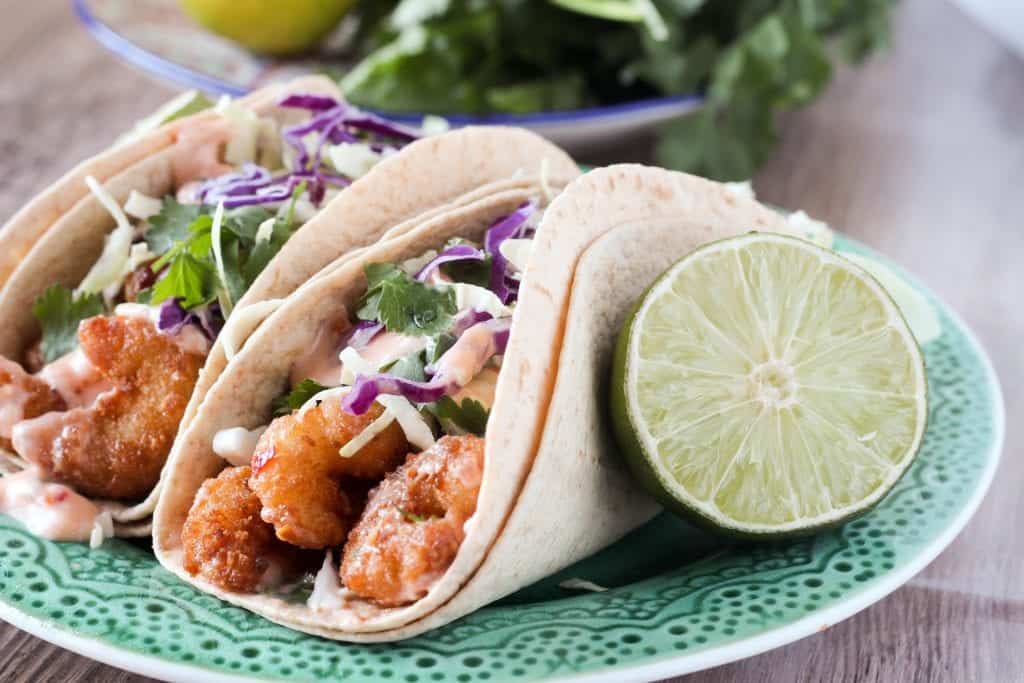 The day just continued in the same rushed manner. I was in my seat in time for our manager's meeting (whew), but it was one thing after another until I left! Craig volunteered to pick up Eli so I could go home and get dinner started.

Last weekend, I picked up frozen popcorn shrimp, with the intention of using them in Po' Boys. Well, I didn't have hoagies for Po' Boys, so I had to majorly improvise! I did have tortillas, and coleslaw mix in the fridge, so I quickly came up with the idea for these Crispy Shrimp Tacos with Cilantro Slaw! 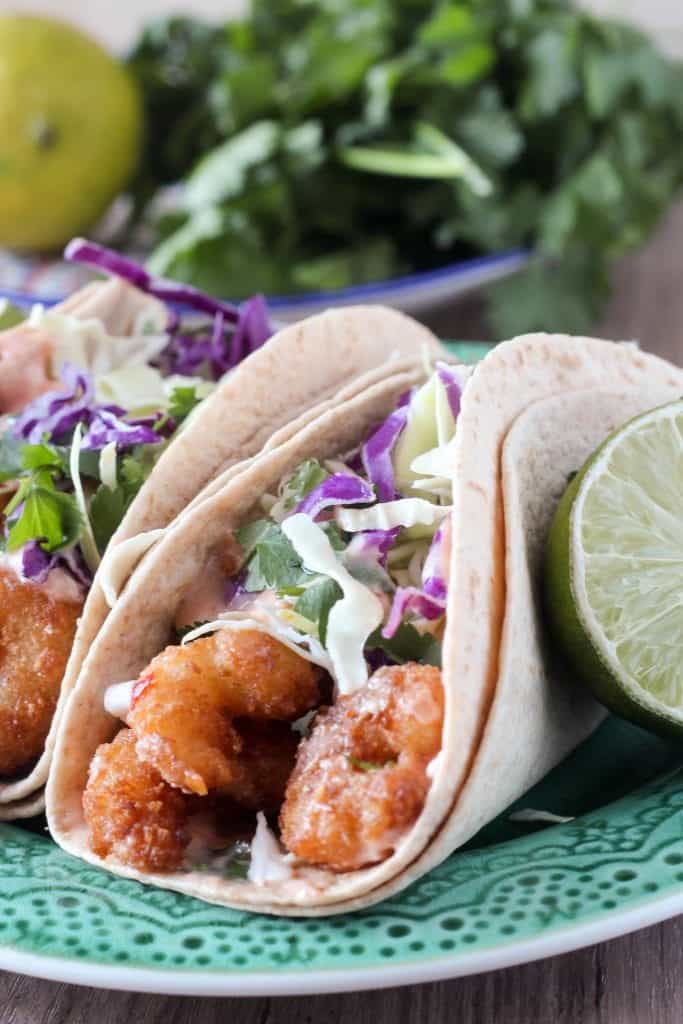 We just returned from visiting family in Mexico, and I've been on a seafood kick ever since. And a taco kick. And now, a Sweet Chili Shrimp Tacos kick. Let's be honest, if every dinner was comprised of either seafood or tacos, I'd be one happy chick! I decided to use my favorite sweet chili sauce to make a delicious, thai style shrimp taco.

I threw SeaPak's popcorn shrimp in the oven to bake. While they were baking, I whipped up a super quick sweet and creamy sauce (with a little bit of a kick) to top the shrimp, and my super popular Cilantro Lime Cole Slaw. These easy shrimp tacos were a hit with the family, and guess how long it took me to pull together at the end of a super hectic, not so fun day? 18 minutes! No joke. 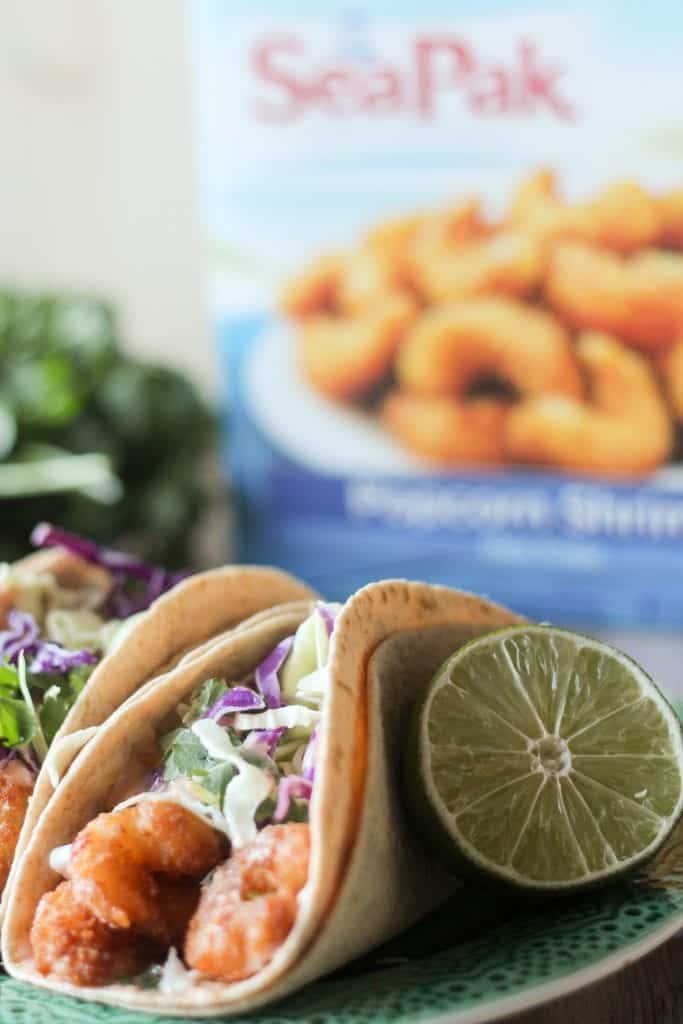 I think anytime you can find a product that helps you pull together weeknight dinners together in a pinch without sacrificing flavor, you're winning! I have so many of these tricks that I use, like finding good quality seafood in the frozen section.

The reality for me is that here in the Midwest, almost all of the seafood you purchase has been frozen, unless you pay an arm and a leg for something flown in fresh! I used popcorn shrimp for my base here, but I think that the these crispy shrimp taco's sweet chili and lime flavors would also mesh well with a frozen coconut shrimp. 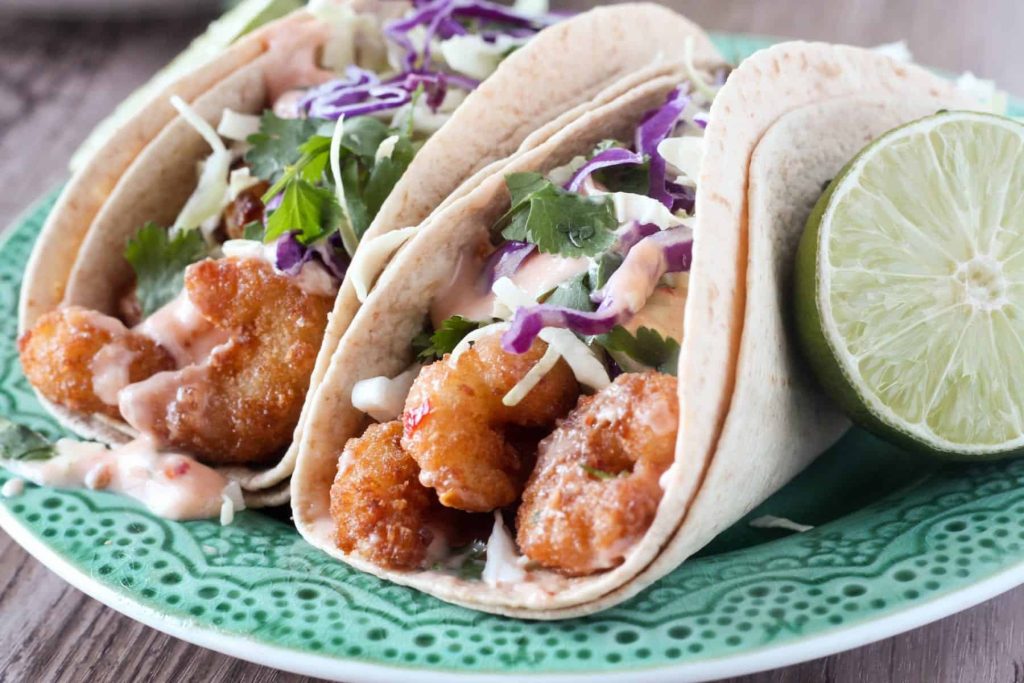 I hope that you enjoy these easy, breezy crispy shrimp tacos! Leave me a comment letting me know if you have any other creative uses for frozen seafood, like this popcorn shrimp!

If you enjoy these crispy shrimp tacos, I think you'll also love:

75 Recipes to Inspire your Next Taco Tuesday Dinner - Hey Donna

30 Crazy Good Shrimp Tacos On The Go - By the Recipes