4 shares
Jump to the Recipe

I like to bake, but I typically don't have the time needed to make an elaborate cake. You'll most often seeing me post quick and easy crowd pleasers instead of elaborate layer cakes or pies.

Marshmallow treats are a staple dessert for me, because they can be whipped up in less than 10 minutes. I remember my Mom bringing pans of Marshmallow Treats to barbecues, and kids and adults alike flocking to them. 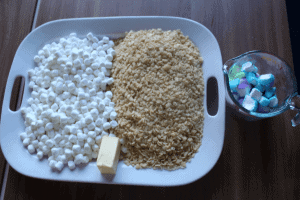 Lately, I've been following in her footsteps and making marshmallow treats often. However, these aren't your ordinary marshmallow treats. I dreamed these up for my husband, who is obsessed with Peeps candy. When he saw these Peeps Marshmallow Treats, he about lost it. The pan was gone in less than 24 hours! (Okay, I might have had something to do with that too). 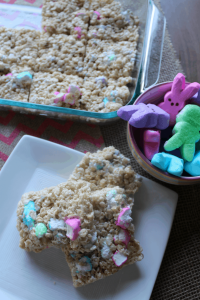 Initially, I tried to substitute Peeps for the mini marshmallows. The result was disastrous! The different colored peeps all blended together to make a strange, unattractive pastel tie dye, and honestly the flavor was off.

I tried again, using the traditional recipe, but then adding chopped Peeps in for a pop of color and marshmallow texture.

Make sure to let the crisped rice and marshmallow mixture cool a bit before you add in the Peeps. It's okay if they melt a bit, but you want the Peeps colors to stay vibrant. Let the treats cool for at least 10 minutes before you cut them. I got a little antsy and didn't wait the full 10 minutes. Don't be like me! 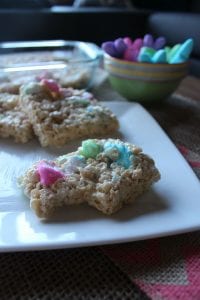 I plan to make another pan to bring to our family Easter celebration, and expect the jokes about dismembered Peeps to flow freely. Do you have a quick and festive Easter dessert you'd like to share? I'd love to hear about it!